The more our lives spin out of control, the tighter we cling to the fixed points we have. It’s a way of feeling secure and safe. In a world of Brexit, Donald Trump, and celebrities dropping like flies, we crave that security more than ever.

Let’s face it, the world was getting chaotic even before last year. The complexity of human society and the pace of change have been accelerating at an exponential rate. This leads to wonderful things we didn’t have when I was young, like smartphones, chap-hop music, and specialist coffee shops. But it’s also bewildering.

I wonder if this is one of the reasons people remain obsessed with protecting the importance of their particular cultural canon. This can be the definition of what’s in continuity for a sprawling franchise like Star Wars or the Marvel Universe. It can equally be literary critics upholding the cultural worth of particular books, claiming a timeless genius and relevance for things that are unapproachable for most people, sneering at whole swathes of culture.

It’s about clinging to the idea that what you had is important and relevant. It can lead to upset when Disney re-boots your continuity or the government takes your favourite classic off school reading lists. As if either of those things make the stories any better or worse.

I gave up on caring about canon when Marvel retconned away much of Grant Morrison’s amazing work on the X-Men.  I still think those are some of the best superhero comics ever. Whether their content and its meaning at the time is canon doesn’t matter. They’re awesome. I’d far rather read them than the latest crossover event or Far From the Madding Crowd, and I think they’re powerful stories despite fitting neither canon.

The world moves on. So do stories, their relevance, and their meaning. They mean different things to different people at different times, and that’s OK. If you find yourself getting concerned about what’s in the canon, maybe stop and ask why it matters to you, or whether it matters at all.

Unless it’s the other sort of canon and it’s pointing at you. Then maybe run.

Over the past fifteen years superhero films have taken huge leaps forward in quality, boldness and willingness to engage with wider themes. They’ve stretched beyond familiar heroics, exploring the political thriller with Captain America: The Winter Soldier, showing noire derangement in Nolan’s Batman films, and providing the most spectacular blockbuster ever in Joss Whedon‘s Avengers. It’s therefore satisfying to see the X-men franchise, which got this ball rolling in 2000, back in the hands of original director Bryan Singer and attempting its most ambitious film yet in X-men: Days of Future Past. 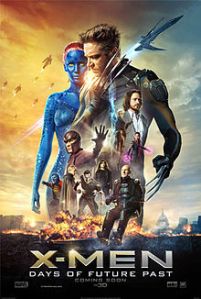 (And yes, I know I said I’d be discussing Guy Gavriel Kay’s Lord of Emperors today, but I went to the cinema last night and I’m really bursting to write about this one because… well, you’ll see.)

Back to two beginnings

I love the X-men films. The first one got me excited about superheroes, contributing to my later interest in comics. At the time of its release it felt fresh and exciting, with a wide range of characters, clear metaphors for civil rights issues, and fantastic action. The impressive cast, especially the ever amazing Patrick Stewart and Ian McKellen, really helped.

Days of Future Past (DoFP) goes back to the tone of the first two films, as helmed by Singer, pulling civil rights, spectacular action and conflicted personal relationships to the fore. It also builds on X-men:First Class, the origin film of a few years ago. As the future X-men find themselves brutally hunted across a post-apocalyptic landscape they realise that their only hope is to change the past. So they send one of their number back in time to interact with their past selves and hopefully save us from a future of evil robot oppression.

And if that makes you pull a face then you shouldn’t be watching superhero movies.

There’s an amazing amount to love in this film. Lets start with the obvious – the amazing cast. As well as Stewart and McKellen we get James McAvoy and Michael Fassbender who are, if anything, even better as the younger versions of mutant leaders Charles Xavier and Magneto. Peter Dinklage – Tyrion Lannister from Game of Thrones – is charismatic as ever in the role of technologist villain Bolivar Trask. The rest of the cast range from good to excellent, but were always going to be overshadowed by those five.

Singer and script writer Simon Kinberg manage to balance a huge number of different elements while still achieving a fairly coherent plot, constantly keeping the film moving. There are some great action spectacles and lovely character moments, ideas from across the X-films, comics and real history all slamming together in a surprisingly well-connected fashion.

And as with First Class there are hints of a wider alternate history that really catch the imagination, like the use of mutants in Vietnam.

But fun as the film might be it’s just not satisfying, and the reason is clear. It’s all about franchise.

The X-men films have been in and out of Singer’s hands over the years. He clearly has strong views on what works and what doesn’t, so there are chunks of this film that are about setting the series back on course, writing out certain characters and bringing back others we thought were gone.

Then there’s the intellectual property (IP) battles to consider. For reasons that would take a whole blog post to explain, both Marvel Films and 20th Century Fox claim the right to use the characters Quicksilver and the Scarlet Witch. Because superhero comic book adaptations are all about IP and farming existing ideas, Fox have asserts their right by cramming those characters into this movie. Hence a plotline where Quicksilver is recruited, saves the day and is then left behind, because they needed him in but ran out of space in an already crowded film.

That crowding is the biggest problem arising from both Singer and Fox’s agendas. There are so many characters and concepts in play here that none of them get properly explored. Characters are disposed of in even more off-hand ways than in the third X-film. Fantastic actors like McKellen aren’t given enough screen time to make use of their talents, and their presence reduces the time left for others. No-one and nothing is properly developed.

This also means taking shortcuts. Professor Xavier’s mental powers and the fact that he is crippled are two key features of the character. Both would have made it challenging to build the plot around McAvoy’s 1970s Xavier, but rather than rise to that challenge, exploring the repercussions of these character traits, the film-makers remove both elements in a crude twist that’s an even cruder reflection on drug addiction. And of course they don’t have time to explore that properly either.

So much potential, so much sadness

None of this stops Days of Future Past being an enjoyable film. It’s a lot of fun. There’s fine acting, fine direction, fine effects.

But with this talent, with these characters, with these ideas it could have been so much more. And the way it has been warped by IP concerns and an over-crowded character palette is tragic.

The lesson for people crafting stories is clear. Don’t try to do everything at once. Pick the things that matter and do them well. Quality of story and characters trumps quantity every time, even in superhero movies.