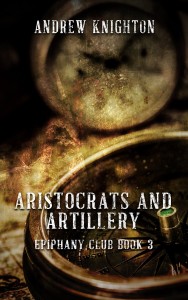 The quaking of the ground shook Dirk’s whole body. His stomach lurched and his legs trembled as he fought to stay upright. Chunks of rock tumbled from the ceiling of the cave, battering at his head and shoulders.

“We’ve got to smash those machines,” he said.

He snatched up an axe handle from beside one of the fanatics he had knocked out and hefted the length of wood, testing its weight and balance. Then, with wobbling steps, he approached the nearest of the two medieval machines that were shaking the cave. Its hammers and levers jerked back and forth with frantic energy, driven by an enormous paddle wheel of ancient wood.

“These are unique artefacts,” Sir Timothy Blaze-Simms said. “We can’t destroy them!”

“They’re gonna shake the whole city down,” Dirk bellowed above the clatter of machinery and falling rocks.

“Then disable them,” Blaze-Simms said. “Please!”

Dirk knew that more lives than theirs were at stake. But he’d never have gotten into events like this if he wasn’t fascinated by the wonders of the world. It would be amazing to show people these devices, hidden for centuries beneath the streets of York.

Instead of striking one of the paddle wheels, he strode out into the stream, icy water soaking him to the waist, and thrust the axe handle through the sturdy oak spokes. Bracing himself, he tried to hold the wheel back, to stop the machine while Blaze-Simms found a way to turn it off.

The machine barely registered his presence. The wheel kept turning, swinging the axe handle around. It smashed into his face. Pain lanced through his jaw as was thrown from his feet.

Dirk fell back into the icy water. Currents churned around him. The paddle wheel caught his leg and dragged him deeper, grinding him against the floor. He was caught between the machine and solid rock, paddles battering his back, breath squeezed from his body. He flailed around, desperately trying to pull himself clear, but the currents dragged him back down.

He could feel his mind fading as the oxygen ran out. In desperation, he grabbed hold of one of the moving paddles. Clinging on with all his might, he let it drag him around, scraping him against the rock and then the rest of the machine, until at last he emerged, gasping and bleeding, into the air.

Flinging himself to one side, he landed heavily on dry ground.

“I say, are you alright?” Blaze-Simms asked. He stood by what looked to be the machine’s controls, a broken lever in his hand. “I’m afraid that woodworm got to this part. Rather stopped me switching it off.”

“That’s it,” Dirk growled as he forced himself to his feet. “To Hell with posterity.”

He picked up a rock and charged at the machine, letting out all his pain and frustration in a mighty roar. He smashed at the controls with the rock. Smashed at the gears. Smashed at the axle, the paddles, the spokes. When a solid length of wood broke free, two long iron nails protruding from his end, he seized hold of that and used it to keep on smashing.

At last, the paddle wheel was reduced to a broken wreck, the gears scattered across the ground. The machine stopped turning.

Up the cave, the other device was still going, still shaking the floor and walls. Dirk raised his improvised club and charged straight at it, like he was back on the battlefields of the Civil War and it was the Confederate lines. He wasn’t just fighting for him, he was fighting for all the other people this thing threatened. For Blaze-Simms. For the inhabitants of the city above their heads. For the poor, deluded fanatics who had set this machine in motion and were now about to be crushed by its work.

He stumbled on the shaking ground and almost lost his footing on a loose rock. But he kept going, charging straight at the heart of the machine, and slammed into the housing of the paddle wheel.

Ancient wood, made brittle by time and fragile by woodworm, exploded into flying splinters. The paddle wheel rolled free, landed with a thud on the stream bed, then began to fall. A sound like screaming filled the cavern as the tortured mass of machinery toppled toward Dirk.

With the last of his energy, he dived away. His bruised shoulder hit the ground and he rolled clear just as the machine crashed down.

At last, the ground stopped shaking and the cave fell still.

Dirk sat enjoying a hearty breakfast of tea and kedgeree. It wasn’t what he usually looked for in a meal, but this was the last day of his holiday and he was feeling adventurous.

A piece of loose plaster fell from the ceiling, landing atop his pile of curried rice and fish.

“They’re finally putting on that performance of Richard the Third this afternoon,” Blaze-Simms said, looking up from his sketches of the earth-shaking machines. “Would you still like to go?”

“I’ve had enough of digging up medieval things,” he said. “Reckon I’ll just go for a coffee instead.”

So ends another adventure for the Epiphany Club. If you enjoyed this, you can find more stories featuring Dirk and Blaze-Simms on my steampunk page, including links to buy e-books, which will help to fund my writing and keep these stories coming. And if you’d like a free steampunk e-book, along with short stories straight to your inbox every Friday, then why not sign up for my mailing list.

Next week, something else entirely.