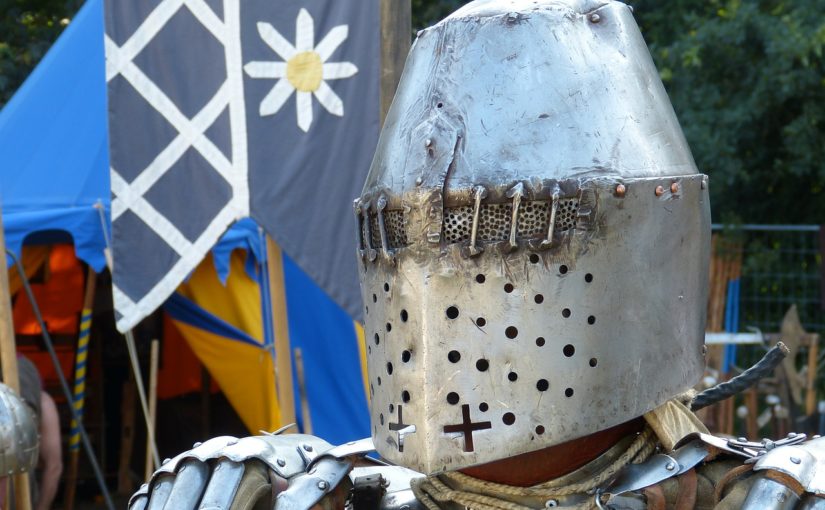 Armour plates clanked as Harry strode into the training yard and faced his opponent. His father had paid good gold for this man to come from Burgundy, allegedly for Harry’s training. But as far as Harry could see, it was one more way of holding him back.

“Defeat Sir Jean with the pollaxe just once,” his father had said, “and then you can go to the French tournaments.”

What Harry heard was “You’ll never be good enough.”

He would show them. He’d out-fought every other young noble in the north of England. He could beat some upstart foreigner.

He snapped his visor down and raised his pollaxe, base forward, so that the pointed steel queue faced Sir Jean. The Burgundian did the same and they advanced towards each other.

Harry brought the pollaxe around and there was a crack as the weapons met. He followed that first feint with another, lower, then pivoted the weapon around for a swift, hard swing at Jean’s head.

Sir Jean stepped nimbly aside, brought his pollaxe around, and knocked Harry into the oak rail at the side of the yard. The force of the blow shook him and he had to pause to steady himself.

“One to me,” Sir Jean said brightly.

Harry clenched his teeth and attacked again. He knocked Sir Jean’s pollaxe aside, feinted left and right, then stabbed at his face.

Again a miss as Sir Jean darted clear in his light German armour.

With a growl, Harry swung his pollaxe around, aiming to stagger his opponent through brute force. But Jean deflected the blow and hooked Harry’s ankle with the head of his weapon. Harry crashed to the ground and the wind was knocked out of him.

Cursing under his breath, Harry pushed himself upright. He needed this win. He wouldn’t be dictated to by his father, left to rot around the castle.

He almost gave in to instinct and flung himself straight at Sir Jean, but years of practice had taught him better. Instead, he feinted low, as if intending to imitate the knight’s last move, jabbed left, then swung the head of the weapon hard at Jean’s shoulder.

In a flash, Jean hooked the head of his pollaxe behind Harry’s and tugged. Harry lost his grip, stumbled, and found the queue of Jean’s weapon pressing against his throat.

Jean stepped back and raised his visor. He was barely even sweating.

“Of course I want to win! That’s the whole point.”

Harry charged, pollaxe raised. Jab, swing, jab, swing, swing, feint, hook at Sir Jean’s weapon, except the weapon wasn’t there. Something slammed into Harry’s leg and he fell to the ground, his shin throbbing.

“I give in,” Harry said, flopping in the dirt. “You’re better than me. I’m not getting to France.”

“Stop trying so hard to win,” Sir Jean said, reaching out a hand. “Pay attention to how you lose.”

“How else will you learn to win like me, if not by seeing how I beat you? You want to win when you get to France, no?”

Harry imagined himself in a sunbaked tilting yard, crowds of nobles watching as he knocked out some foreign titan, women gazing at him with wide eyes. They all cheered his name.

He grabbed Sir Jean’s hand and hauled himself to his feet. Armour clanked as he backed away, raised his weapon, and took a fighting stance.

As I’ve mentioned before, one of the great things about living in Leeds is going to the Royal Armouries to watch the reenactors. A display of pollaxe fighting became the inspiration behind this little story.