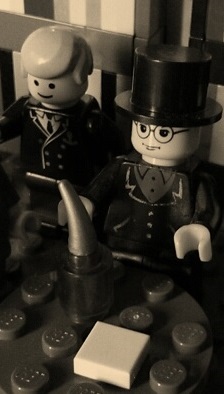 “That was delicious.” Isabelle McNair placed her cutlery carefully on the empty plate and peered around the flat. “Should I call for a servant?”

“You’d be lucky.” Dirk Dynamo leaned back and lit a cigar off a wall mounted gas lamp. “Once they’ve experienced a couple of Tim’s inventions going wrong, staff never stick around.”

“I’m afraid Dirk’s right.” Blaze-Simms grinned as he looked at his guests. “But I have turned the problem into a solution.”

He took a box from the bureau behind him and pushed a button on the top. With a hiss of steam, a mechanical arm extended from the cabinet and took hold of the nearest plate. More followed it, grabbing wine glasses, leftover pudding and empty plates.

Isabelle applauded. It was one of the most marvellous machines she had ever seen.

“Wait for it…” Dirk raised an eyebrow.

“I don’t know what you-” Blaze-Simms was cut short by a crash of shattering glass as the port decanter exploded in the device’s grip. His face fell. “Oh dear.”

He pressed the button, and then another one next to it, but the machine kept going. A frantic look spread across Blaze-Simms’s face as the machine flung a chair across the room and then grabbed hold of the table.

“Steam engine in the linen closet.” Blaze-Simms kept hitting buttons to no effect. “There’s a pipe feeding into the left side of the machine.”

Dirk leapt toward the pipe and the steam trickling from its joints. But as he vaulted forward the machine lifted the table, swung it like a cricket bat and knocked Dirk flying. The window exploded as he hit it and went tumbling into the street.

“Are you alright, Mr Dynamo?” Isabelle shouted, her heart racing in alarm.

“I’ll live.” The distant reply was almost a groan. “Ain’t gettin’ back up the stairs anytime soon though.”

“Then I’ll deal with this.” Isabelle glared at the machine. She was not going to let a glorified cupboard be the ruin of her. “Sir Timothy, how can I-”

The machine swung the table and Isabelle darted back, dragging Blaze-Simms with her into the corner of the room. Half a dozen mechanical arms were flailing around, turning the whole space into a whirl of deadly, determined metal.

“Terribly sorry.” Blaze-Simms had a screwdriver in his hand and was fiddling with the control box. “I overlooked certain limitations that would have told it what wasn’t mess.” He ducked as one of the arms tried to grab his collar. “I’ll remember next time.”

“Lets worry about getting through this time.” Isabelle looked around. There was almost nothing left in the room around them, and five out of six arms were busy yanking books off of shelves, trying to cram them into the same recess as the dirty dishes. Just one hovered in front of her like a snake, its pincered end snapping open and shut, ready to tidy her away the moment she came near.

“Dash it all, this isn’t working.” Blaze-Simms frowned in exasperation at the controller.

“Then maybe this will.” Isabelle grabbed the controller and waved it in front of the arm, then flung it on the floor a few feet away. As the arm reached down to tidy the mess, she darted past it. The others turned to stop her as she stood by the side of the cabinet and the hissing metal pipe. One lunged down and she leapt out of its way. The pincers slammed into the pipe, which burst open, filling the room with steam.

Its power cut off, the tidying machine ground to a halt, limbs crashing down on the floor.

Isabelle righted a toppled chair and sat down, fighting the trembling that now threatened to take over.

“Maybe if I pay more I could find a tolerant cleaner,” Blaze-Simms said from the far corner of the room.

“Maybe,” Isabelle said. “Or maybe you could just learn to wash the dishes.”

One thought on “The Clatter of Dishes – a #FlashFriday story”