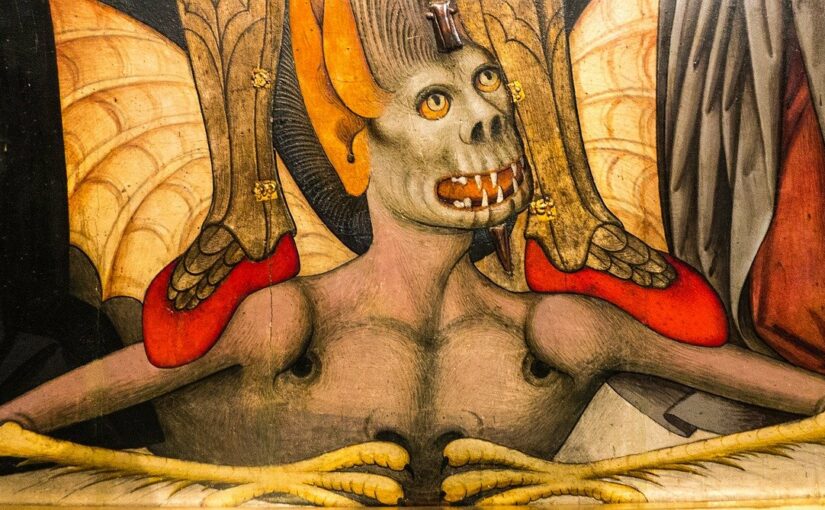 As he entered the throne room, Temujin forced himself not to stare at the demon. It was eight feet tall and glowed like fire beneath chains forged from holy steel. Qadan the Terrible had conquered it, as he had conquered every kingdom of the steppes.

Temujin bowed before Qadan and held out a long roll of hide filled with neatly scribed figures.

“My lord, an accounting of this year’s tribute from the provinces,” he said. “A measure of your power.”

“Ha!” Qadan said. “This is the real measure of my power.”

He clicked his fingers, the demon’s eyes glowed, and the accounts burst into flames. Temujin dropped them and leapt back, his heart racing. It didn’t matter how many times his master showed off like this, to courtiers or family members, servants or ambassadors, it still had the power to shock. This was how he held his throne.

He strode out of the room, courtiers hurrying after him. A servant scurried in, swept up the ashes, then hurried away.

Temujin stood alone facing the demon. He wiped his hands on his robes, then clutched them together to hide his trembling.

“You should fear me, little man.” The demon’s voice was the rumbling of war drums across the steppes, the crash of city walls falling. “If I were free of these chains, I would crush you like a tick, blood bursting between my fingers.”

“Would you?” Temujin asked. “Or would you have better things to do?”

“Ha! You’re right. You are not important enough. I would lay waste to this empire, make a ruin of everything your warlord has built, show the world how weak he is.”

Temujin drew a key from the sleeve of his robes. It had taken him years to learn where the key was kept, years of working his way up the imperial bureaucracy, of suffering Qadan’s taunts and threats, of hiding everything he thought and felt. Years in which the ghosts of his family faded while their bodies rotted in a province the warlord didn’t remember conquering. Temujin had thought that his fear would fade in that time, seeing the demon every day, but instead it had grown, a cold and spiky presence in his guts.

Some things were more powerful than fear.

Temujin slid the key into the lock that bound the demon’s chains. There was a click, too quiet, without the drama the moment deserved. Then the lock fell open and the chains crashed to the floor.

The fire of the demon blazed and Temujin staggered back. The demon howled with laughter, then sprang into the air. It burst through the ceiling, splintering rafters and scattering tiles, then flew away, raining fire on the city as it went.

There was a rush of footsteps. Qadan burst in, a hunting bow across his back, followed by a herd of courtiers. He stared at the empty chains and his face went blank. He clicked his fingers and nothing happened.

“My lord, the demon broke free,” Temujin said, fighting back a grin of triumph. “It has sworn to tear your empire down.”

“All is lost!” wailed one courtier.

“Ruin and destruction!” shrieked another.

“The horror!” howled a third.

The courtiers rushed away, leaving Temujin and Qadan.

“We grow weak in times of rest,” Qadan said. “Our enemies stop fearing us.”

“As you say, my lord.” It was all Temujin could do not to spit out smug words. Revenge was his. Now he just had to get out alive.

“That’s why it’s good to have a threat at the ready.” Qadan prodded the fallen chains with his foot. “Defeating it will reforge our weakened metal.” His grim expression slipped into a predator’s grin. “I have been looking forward to this.”

“But…” Temujin stared, mouth open. He took a shaking breath. “Surely you never meant to…”

“Your robes are burned, Temujin. You must have been very close to the demon.”

Temujin’s blood froze. He could hear his family ghosts calling him to join them.

“Always have a threat ready, Temujin. It keeps you from complacency.” Qadan turned away. “Prepare fresh accounts for my return. I’m going war.”