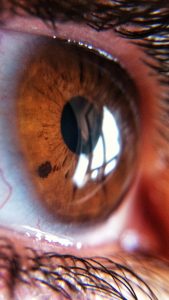 “You never answer when I call,” Jenver said as she stormed around the room, thrusting possessions into her bag. Toothbrush, pajamas, books, everything lying in the open.

Everything except the statue of Hobal of the Many Bodies, with his broad chest, seven eyes and thirteen arms.

“It’s not like I ask much,” she continued, glaring at the statue. “But if I’m going to be your high priest, I should at least get a reply to one or two of my prayers.”

Ignoring the wardrobe full of priestly robes, she approached the old wooden chest of drawers that held her personal clothes. The top drawer handle was damp and rubbery to the touch, and she jerked back in alarm.

The handle had been replaced by an eyeball. So had the one next to it. The drawer below had gained a mouth.

Its lips parted. The wood around it rippled like flesh, making Jenver’s skin crawl.

“I am Hobal, He Who is Praised Most Highly,” the drawers announced in a voice like a stampede. “How dare you abandon me?”

For a moment, Jenver stared in awe. It was years since she had seen any sign of response from the god. Direct manifestations were almost unheard of. Maybe he loved her after all.

Then she remembered all those years of silence.

“We pray and you never answer.” She folded her arms across her chest. It had taken all of her courage to consider giving up her career, but now the decision was made, stubbornness carried her through the shock of the manifestation. “I’ve had enough.”

Jenver took a step back. Her leg knocked against the bed.

“Unpack your bag,” Hobal commanded. “Return to my service or face the consequences.”

The bed shifted as the mattress turned into a giant tongue held up by a frame made of arms and legs. The pulsing of the tongue against her leg made Jenver want to heave. The madness of the sight made her want to curl up in the corner and hide.
If she had seen even a fraction of this power before, things would have been different.

But then, if Hobal had this power before, why was he only using it now?

“What consequences?” she asked.

The tongue ran along her thigh, leaving her trousers soaked with drool.

“Is that all you can do?” she asked. “Terrible things? Because I’ve been waiting all this time for your bounty to the faithful. I’m not staying to be bullied.”

“Then what will make you stay?” the drawers asked.

“Just give me one good thing,” Jenver said. “Something to make my service worthwhile.”

The eyeballs turned to look at each other, then down at the lips.

“Um, flowers?” the Hobal drawers said. “Gifts of flowers are a good thing, are they not?”

“I organise the flower rota for your temple!” Jenver said. “I don’t need you to give me flowers.”

“Argh! You’re my god, not my boyfriend!”

“Gold, then?” Hobal sounded pleased with himself. “I can make you wealthy.”

“If I wanted to be wealthy I’d have become a stockbroker like dad wanted.”

Gritting her teeth, Jenver grabbed one of the eyeballs and pulled. The lips screamed. The drawer opened, revealing her socks.

“That’s it!” Hobal bellowed. “You’re not getting out of here alive.”

The doorway turned into another mouth, teeth gnashing up and down. A liquid that smelled like vomit oozed out from under the bed and started dissolving the carpet.

“Fine.” Jenver threw her socks down into the sludge. “I dedicated my life to you. If you won’t answer the prayers of your people, I might as well be dead.”

“Wait.” The eyes looked at each other again. The one she’d pulled on was bloodshot and twitching. Then they turned their gaze on her. “When you say answer, do you mean give people what they want?”

“Yes,” Jenver said. “No. Maybe. Sometimes. People ask for stupid things. But you could at least tell them why you can’t help.”

“You would stay for that?”

“I…” Jenver hesitated. It sounded so much better than what had been happening. Infinitely better than dissolving in a room full of stomach acid. But it wasn’t actually good. “You have to do what they ask for sometimes as well. You can’t always say no.”

The giant lips pursed. Then the whole chest of drawers leaned forward as if nodding.

The tongue turned back to a mattress, the teeth to a door frame. Bile stopped oozing from under the bed, though the carpet would need replacing.

“And I on you,” the lips replied before disappearing from the front of the drawer.

The eyes – one white and one bloodshot – stayed staring at her as she unpacked and prepared for the evening service.

This story came out of an exhibit I saw in a museum while on a date. Because I will take inspiration from literally anywhere, and have weird ideas about what makes a good date.

If you enjoyed this story then you can get more like it by signing up to my mailing list. You’ll get a free e-book and stories straight to your inbox every Friday.