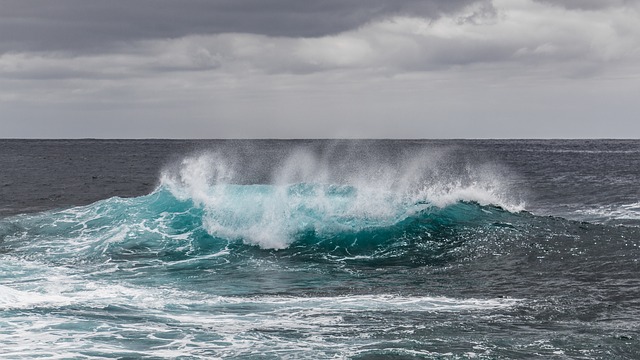 The fog rose from the sea during the night, a white tide that engulfed the town, turning houses into looming grey crags and people into distant, shifting shadows. Land and sea no longer parted at the shoreline. The bodies of the living were as blurry, their features as faded as the memories of the dead.

I had waited a month for a morning like this. Waited ever since a chunk of driftwood had washed up on the shoreline, a splintered plank with the same blue paint as my father’s fishing boat. Waited with the dread of an eldest child, my fears buried beneath the resilience I had to show for my sisters. The resilience my father had taught me.

I walked the fog shrouded streets, cobbles slippery beneath my feet, down to the harbour. In my hands were the well-worn knife my mother used to clean the catch and the last chunk of the loaf that had fed us for three days. Traditional tools for ancient magic.

I kept walking, off the cobbles and onto the smooth stones of the front, then down from them onto the sand, past boats drawn up above the tide line. No-one would be sailing today. Only a few old sailors looked up from scraping barnacles or spreading tar. None spoke. They had known my father. They knew why I was here.

Loose sand became damp and close-packed as I approached the sea. I stopped where the waves would pass in and out across my feet. I took a bite of the bread, its taste like dust in my mouth, and cast the rest into the sea. Then I ran the knife along the back of my hand, a sharp line of pain that pierced my numb heart.

I sank to my knees and thrust my bleeding hand into the surf. The water was icy cold and the wound stung but I didn’t flinch. Resilience, as my father had taught me.

Something stirred amid the waves. A figure, as grey and indistinct as any other, approached out of the fog and the ever-shifting ocean. As it came closer, I saw that it was made not of flesh but of water. Its beard was a tangle of kelp, its eyes cockle shells. Though I had last seen it as flesh and hair, I knew that face, and seeing it like this turned a long drawn out dread into terrible certainty.

“Father,” I said, the breath catching in my throat. “You’re dead.”

“A storm on the first night out,” he said, his voice the rattle of pebbles scraping across the ocean floor. “The boat was shattered and I was embraced by mother ocean.”

He cupped my face in his hands. That touch finally broke the dam inside me and tears streamed down my cheeks, running into the salt water that he had become.

“Don’t be afraid,” he said, his gaze familiar and yet strange, the father I loved made uncanny by this body he wore. “Mother ocean sends me with a message. You are touched by the tide. You will sense its comings and goings, know when it is safe and when there is , when the fish will fill your nets and when they will be absent. This is her gift to you, in exchange for me.”

I tried to bury my face in his chest, as I had done when I was young and in need of comfort. But there was no warmth there, only the icy water.

“It is small recompense,” he said. “But it is all she offers and more than most receive. Please, my child, accept it. For your mother. For your sisters. For me.”

I fought down the trembling and nodded my head.

The wave that was my father surged across me, soaking me through , through flesh, through bone, to the spark of light that glimmers within. And then I stood alone at the tide line, without even a goodbye.

I wanted to break down weeping. I looked out across the water, as my father had done so many times. The fog was fading, sunlight dancing once again on the tips of the waves. I could sense a shoal of cod approaching, silver bodies flitting in the deep.

I saw the future stretching out before me. Someone would grant me a place on their crew, for my father’s sake. I would guide them to the fish before others found them. I would earn my share and my place in that crew. In time I would buy my own boat. I would feed my mother, my sisters, and in time a family of my own. Mother ocean would be my lifeline and she would be my grave, as she had been for my father. Then I too would emerge to guide my child, before I joined my father at last and forever.

For the first time in weeks, I felt as though I was standing on solid ground. My father was dead but a part of him remained. Now was my time, not just to be resilient but to be strong.

I turned and walked through the fading fog back up the beach.