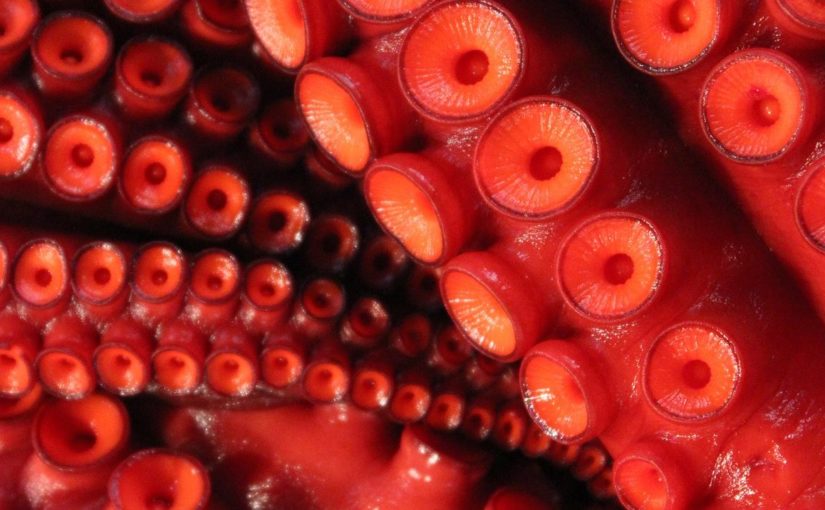 “Tell me the truth, Mister Atticus,” the Dangveli President said, waving a mucus-covered tentacle. “Do humans even like my people?”

I followed her between blister-red trees, stepping carefully to avoid the oozing potholes of the formal gardens. It gave me an excuse to look away while I prepared my words. There was a lot at stake here, both for my career and for Britain’s space-faring efforts.

“Would we have asked to share a corner of your world if we didn’t like you?” I asked, faking a sincere smile in case she knew human expressions.

“I find the ways of aliens confusing. Often, they accept our offer of space on the carbon plateau eagerly, then become unhappy and hostile. No-one stays. They just dig up diamonds and leave.”

Her sixty-seven limbs all drooped and the stalks of her eyes lowered. I felt an urge to admit the truth – that everybody left because the Dangveli were so ugly, so foul smelling, and so objectionable in their behaviour that no-one could bear to share their planet. That their ongoing search for an intergalactic love match would forever remain unfulfilled.

But no-one gets into diplomacy to tell the truth.

“I’m sure they all had their reasons for leaving,” I said. “But humans will be different.”

“Will you?” She stopped by the railing at the edge of the raised garden, looking out over the city. A breeze hit us, carrying the stench of seven billion Dangveli from the city below, and I fought back the urge to vomit.

“Humans are the most adaptable species in the galaxy and the British the most tenacious of humans. Whatever has caused others to run away, we’ll stick with it. We’re eager to establish a special relationship with the Dangveli.”

Digging up their precious minerals could be a very special sort of relationship.

“We have been disappointed before,” the President said, turning to look at me, her eyes as big and innocent as those of a monstrously deformed puppy. “Can you swear that it will not happen again?”

It was hard to keep this going when faced with such sad desperation. But I had a duty, to my country and to my Christmas bonus. I opened my mouth to speak.

The President touched a tentacle to my lips. Mucus dripped onto my tongue. My whole body clenched. Was it possible that this moment was as grotesque to her as to me? Surely not.

“If you cannot tell the truth, please do not speak at all,” she said. “Do you really like us?”

All I could think about was the ooze on my face, the grotesque violation of my mouth.

I took three steps back, sank into one of the holes, and staggered out of it with my leg soaked in corrosive sap. I spat into the bushes and wiped my mouth with my sleeve, while trying to ignore the itching sensation creeping up my shin.

The President stared at me.

“How dare you. Coming to my planet, saying these hurtful things!”

“You asked for the truth, you got it! You people are ugly. You stink. You’re vicious, mean spirited, and make constant demands on other species, which we all tolerate because of your wealth. Anyone who sends settlers discovers their limits and runs screaming.”

“This is what you call diplomacy? I will have you thrown into the burning vats. Guards!”

The shock of her touch had worn off. My whole body slumped as the reality of what I’d said sank in. Of all my fuck-ups, this was the most fucked.

It didn’t matter that she’d asked a dozen times – no-one wants to hear that they’re the monster.

The guards’ slimy tentacles wrapped around my arms. I contemplated which would be worse, drowning in itching ooze or facing the wrath of my boss back at the embassy on Herrje. A terrible death was terrible, but at least it had an end.

“No-one speaks of my people like that,” the President said, tentacles spread wide in fury.

“Only because the others don’t have the courage to face the truth.”

“You make your fate worse with every word.”

“The truth about themselves.”

“The truth about what?” Her tentacles curled in just slightly.

“That we’re all just as grotesque to each other. Look at me, I’m a ridiculous pink stick with weird patches of fur. My limbs are angular and inflexible. I must look awful to you.”

“You and I, we can be honest about that. If your people came to my planet, they’d soon hate it and leave. The same will happen here. But if we accept that, if you let us send more settlers when the previous ones give up, then maybe we can make this relationship work. What do you say?”

The President stroked her neck ridges.

“You find all aliens monstrous, and they you?” she asked.

“Of course.” I set aside thoughts of the elegant Velanth, the beautiful Simdap, and the adorable hamster-like Quertzels. “Don’t you?”

I didn’t know if she could see the truth, but I knew when someone heard a lie they could live with.

“Guards, release him,” she said. “We have a treaty to arrange.”

As the grip went from around my arms, she held out a tentacle.

“I believe you humans like to shake on a deal.”

“No touching,” I said, holding up my hands. “We’re both just too gross.”

Here he is again – Julian Atticus, cynical PR officer and public face of the British in space. Not only here, but in a new story, “Communication Breakdown”, published today by Metaphorosis. If you want to read more, then head over to their website.