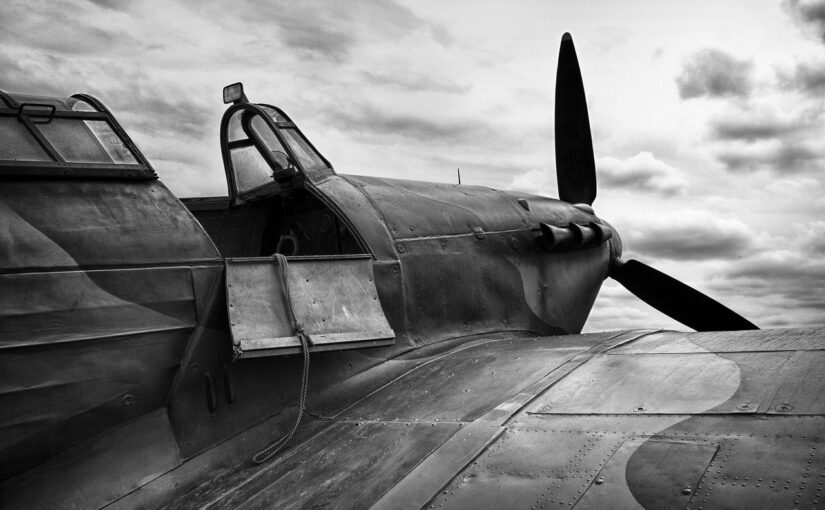 Alan stood alone at the edge of a sheep field, watching planes battling in the sky above. Some of them were from the nearby airbase, others intruders who had flown all the way from Germany. They darted and chased through the sky like a flock of deadly birds.

With a roar of dying engines, a plane streaked across the sky on a trail of smoke. Alan watched open-mouthed as it hit the field, ploughed through the dirt, and came to a stop only fifty feet from him.

It was a fighter, Alan could see that, but too battered and mud-streaked from the impact for him to make out any insignia. Other boys in his class could tell a Spitfire from a Messerschmitt by their shape, but none of those boys had shared their knowledge with Alan. To them, he was just an outsider with a funny accent.

Flames crept across the plane towards the cockpit. Teachers had told Alan to find an adult if he saw a plane shot down, not to go near the wreckage himself. But he could see someone moving in the cockpit, struggling against the closed canopy, and they would be dead before he could get help. He was scared of getting in trouble for disobedience, scared that the pilot might be a Nazi, scared most of all that he might get burned, but he couldn’t leave someone to die.

Alan ran across the field and climbed up the side of the plane. His skin throbbed at the heat from the fire as he grabbed the edge of the canopy. The pilot pushed from the inside and Alan quivered as he pulled with all his might.

There was a clunk, the canopy flew back, and Alan tumbled to the ground. His head hit the hard earth and the world filled with spinning stars.

Gloved hands grabbed Alan out of the dirt. He bounced about in the pilot’s arms as the man ran from the plane. Then there was a boom, a blast of air, and he landed hard again.

As the dizziness faded, Alan looked over at the pilot, who was sitting up and clutching his shoulder. If he wore any insignia then they were hidden by soot and blood. The boys at school might have recognised the flight suit, but it meant nothing to Alan. Was this man British or German? Should he be helping him or running for his life?

The pilot turned to face Alan, revealing an empty holster at his waist. A pistol lay on the ground nearby.

“Where are we?” the man asked in a strange accent.

A chill ran down Alan’s spine. Germans had killed his father at Dunkirk, now one of them was going to kill him.

He could run, but retreating hadn’t stopped the Germans shooting dad. If he ran, the German could just pick up that pistol and shoot him.

But if he got the pistol first…

Alan lunged and grabbed the weapon. Its grip was cold and hard in his hand. He scrambled back, pistol raised, away from the befuddled looking pilot.

“You’re my prisoner,” he said, his voice wobbling as much as his hands. He was all alone, faced with a merciless killer. Mum kept telling him that they had to be brave, to manage on their own, but it was hard to be brave when you were staring down a wild-eyed Nazi.

“Please,” the pilot said, flinging up his hands. “Not point gun at me. Trigger is too easy, yes? Will shoot, bang bang!”

Alan rose, trembling, to his feet, and gestured for his prisoner to do the same.

“I should just shoot you,” he said, tears running from his eyes. “Like you Germans shot my dad.”

He pointed to the flaming wreckage, but even if Alan had known how to spot a Hurricane, he couldn’t have told if that was one. These could just be lies a German would tell to save himself.

His grip tightened on the pistol. He took a deep breath and steadied himself. This was his chance to get revenge for dad.

“Please,” the man said, his voice wavering. “I am here to help. Fight Nazis who kill my brother.”

Alan hesitated, his finger resting by the trigger. Someone had told him there were foreign pilots flying British planes. Was it really true?

“You’re my prisoner,” he said, pointing towards the road. “Now march that way.”

As they walked towards the airbase, the pilot talked to Alan in broken English. He said that his name was Jakub. He talked about his home, about how he’d come to Britain, about flying planes. Sometimes Alan got so caught up in it that he found himself asking for more details. Then he remembered that this could all be a trick and he snapped at Jakub to walk faster.

They approached the airbase, Alan wielding the gun, Jakub with his hands in the air. A sentry rushed out to meet them, only to burst out laughing.

So it had been true.

“Sorry,” Alan said, handing over the pistol. “I just thought…”

“You save me from plane,” Jakub said, ruffling Alan’s hair. “For that, I do not mind the gun.”

“I should go.” Alan had thought that he was being a hero, but instead he was pointing a gun at one. Shoulders slumped, he turned away, heading back down the road alone.

“Wait,” Jakub said. “You stay, we call parents to fetch you.”

“My mum works until late,” Alan said. “And my dad…” He stopped, fighting to hold back tears. “My dad died.”

Jakub whispered something to the sentry, who looked over at Alan, then nodded.

“We’ll need you to give us a report,” the sentry said. “Tell us what you saw when the plane came down.”

“Really?” Alan stood a little straighter. He was going to help the RAF.

“After that, I take you to meet my squadron,” Jakub said. “We need local to run errands – you think you can do this?”

“This way, then,” the sentry said, pointing towards the gates of the base.

Alan followed him inside.

This summer marks the 80th anniversary of the Battle of Britain, one of the most celebrated and mythologised moments in British history. This story is set during that struggle.

I’ve also got a new Commando Comic out this week to mark the occasion – Flying Fever, the tale of a pilot living through one of the most desperate moments in the history of the RAF. You can find it on Comixology or wherever Commando Comics are sold.