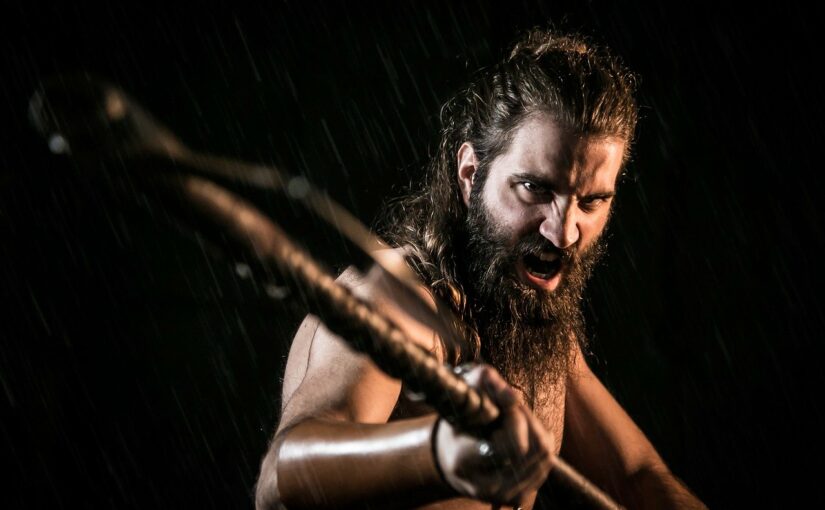 “So, we meet at last, Torbad the Invincible.”

The voice boomed across the throne room, so deep and menacing that it rattled the goblin skulls hanging from Torbad’s belt. It had taken him days to fight his way into the fortress of Angvald the Merciless, but it had been worth it. The place had everything he looked for in an evil overlord’s lair: a faceless figure perched on a throne carved from ancient granite; a towering bodyguard at the back of the dais; flickering firelight to add shadows and uncertainty. Who knew how many guards were waiting to leap out when Torbad attacked?

Slaying this sort of villain was the stuff of legends.

“I have crossed vast deserts and towering mountains to face you,” Torbad proclaimed, unslinging the war axe from his back. “Do you have any last words before your reign of terror ends?”

There was a whispering, and then the booming voice echoed through the room.

“Words are cheap, barbarian. Show me some action.”

Torbad frowned. That had been a good line, and he hoped that the bard he’d dragged along was paying attention, but something seemed out of place.

“Did that guy behind you do the talking?” he asked, peering over Angvald’s shoulder at the looming bodyguard.

There was whispering again.

“I speak for myself, intruder,” the voice boomed. “And I say it is time for you to die.”

“It is him.” Torbad pointed with his axe. “I can see his lips moving behind the helmet.”

Angvald rose from his throne, plate mail gleaming blood red in the light from the fire.

“Fine,” he snapped, his voice shrill. “I don’t have the booming overlord voice, so I get Bors to do it for me. But I can still kick your spleen out through your spine.”

“Wait wait wait,” Torbad said, narrowing his eyes as he peered at Angvald. “That armour, does it even fit you?”

“Of course it fits me! Now come forth and fight.”

“I know armour, and that’s clearly not your size. The helmet’s wobbling, and the fingers on your gauntlets don’t move.”

This was a disappointment. Maybe Angvald wasn’t the mighty warlord Torbad had hoped for, just another faded wannabe. The bard would have to make some careful choices when telling this tale.

“Fine!” Angvald shook his arms until the gauntlets and vambraces fell off, revealing pale, slender hands. He kicked away thickly soled boots, losing half a foot of height. Finally, he wrenched off his helmet, revealing the face of a teenage girl. “I built it big to look intimidating. You got a problem with that, mister stuffed loincloth?”

Torbad stared up at her. This story wouldn’t just take some careful telling, it would need a complete rewrite. It was the stupidest thing he’d ever seen.

He burst out laughing. The sound filled the throne room, echoing back from looming pillars and a high, domed ceiling. Here was Angvald the Merciless, up and coming warlord of the east, a name whispered in words of terror, nothing more than a little girl. Was this who the knights of Gellent had fled from at Crimson Moor? The tyrant who squeezed a king’s ransom from the Republic of Crows?

Maybe the bard should tell this tale straight after all. The lads at the Adventurers’ Arms would love it. Torbad laughed until his sides ached and he had to catch his breath.

“Something amusing you?” Angvald asked, sinking back into her seat, fingers drumming impatiently on the arm of the throne.

“Nothing, nothing,” Torbad said, wiping a tear from the corner of his eye. “So, do you want to show me straight to the treasure vault, or do I need to spank you first?”

“What?” Angvald’s face turned cold and hard as a gargoyle.

“I just don’t know how this is meant to work. I don’t see many little girls dressing up as a warlord.”

“I am a warlord! Who do you think came up with the flanking manoeuvre at Crimson Moor, or forced the Republican troops into submission? Just because I have to put on this show for idiots like you, that doesn’t mean I can’t do my job.”

“Sure, of course.” Torbad chuckled. “Now seriously, show me the loot. I’m not meant to hit women, but that won’t stop me flinging you over my shoulder and—”

“Everyone knows that girls can’t be warlords.”

“Well it’s a good job everyone doesn’t include my mum, because she told me—”

“Enough!” Swinging his axe, Torbad strode towards the throne. “Let’s get this over with.”

Angveld’s hand shot down into the shadows beside her throne. There was a twang, a thud, and a shock of pain that brought Torbad to a halt. He stared, bewildered, as blood ran down his chest from the hole created by a crossed bolt.

“But…” He tasted iron on his breath.

Angveld picked up the other crossbow, the one to the left of the throne, took aim, and shot Torbad through the throat. He hit the ground with a satisfying thud. Behind him, the bard soiled his britches, then turned and ran screaming from the hall.

“Barbarians are such idiots,” Angveld said, setting the crossbow down with a sigh.

“Now, now,” Bors’ deep voice came booming from behind the throne. “I taught you better than to use cheap stereotypes.”

This story emerged from a silly conversation at my book club, so thanks to Jamie and Kieran for the inspiration. It was also influenced by a recent controversy of a recruitment poster apparently encouraging people to give up on their dreams. Sometimes a government department’s poor judgement becomes my writing fuel.