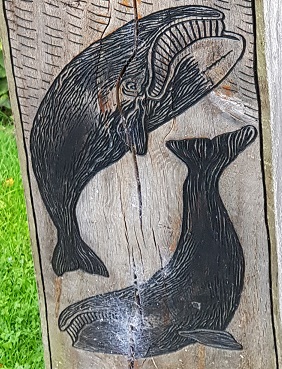 John approached the whale yard at dawn, like he did every day. The sun was rising over Whitby, a golden disk emerging from the grey of the North Sea, silhouetting the fishing boats and casting the houses in a rich and warming light.

John felt that warmth too, soaking through him, giving him a moment of happiness despite the smell of whale oil heavy all around. For that moment he smiled.

Then he stepped into the yard.

A whaling ship had come in yesterday, the Venerable Sue, with a whale’s jaw tied high on the mast to signal a successful hunt. The crew had brought out heaps of blubber, bones, and meat, and carried it all to the yard for processing. Somewhere along the line money must have changed hands, because the Sue’s crew had made merry in the taverns after dark. John’s pay would come at the end of the week, after he’d cleaned those bones and boiled the blubber, enough to keep him fed and warm and sheltered. A decent living for a humble man.

Matthew was in the boiling house already, lighting fires. John helped him stoke the flames then slide slices of blubber into the great iron pots where the oil was rendered. Soon, the building was thick with the smell of it, a smell that clung to John’s clothes just as it clung to the yard long after the fires went out.

“Do you ever wonder what else you could have done?” Matthew asked as they stirred the pots.

“Didn’t you ever want to be a sailor or a preacher or something like that?”

John shook his head. “Just this.”

More men had arrived and were helping with the rendering. John stepped out into the yard, to help scrape the bones. It was messy work, but satisfying somehow, making things clean and ready for sale.

The sun was at its peak. Soon it would sink towards the sea and another day would end, another few pennies earned amid the smell of rendering oil.

John approached the whale yard at dawn. The sun was somewhere behind the clouds, the houses and fishing boats cast in a soft, pale light. It soothed his spirit, for better or for worse. Hard to feel excited on such a day.

They were still working through the haul from the Venerable Sue. John and Matthew lit the fires and put the pans on while they waited for the others to arrive. Soon the smell was there, familiar and grotesque, as inescapable as breathing. John gagged as a thick cloud of it clawed at his throat.

He sighed in relief as they stepped out of the boiling house and headed for the bones. Soon, his hands would be sticky with fat and half-dried blood, but at least the bones would be clean.

“You alright?” Matthew asked, peering at him.

“Fine,” John said, and it almost felt true. But there was a hollowness inside him, something that even cleaning bones couldn’t mend. A feeling he couldn’t describe or explain, but that made him feel as though he was falling into himself, tumbling forever into nothing.

He looked over at Matthew, who had pulled out a scraping knife and set to work.

“Good thing you like it here then, eh?” Matthew gestured at the heaps of bones and the boiling house, dark and greasy smoke trickling from its door.

John hesitated a long time before he answered.

The sun peered through a thin patch in the clouds, white and washed out, a cold and uncaring eye. They cleaned the bones and the day dragged on.

John approached the whale yard at dawn. White clouds were drifting through a blue sky, casting patches of shadow across the town. Moments of warmth and coolness passed over John as he stood at the gate of the yard, stuck in the moment before going in.

This was what he did, a good job for good pay. But even that thought couldn’t fill the hollow inside, or stop the bile rising in his throat at the thought of stepping once more into the boiling house. He could still smell its stench on him from yesterday. No matter how hard he tried, he never got clean.

He looked out across the town. A merchant ship was loading at the docks. Fishermen were heading to sea. In the shipyard, carpenters repaired a coal barge. He couldn’t imagine doing any of those things.

He didn’t have to imagine working in the whale yard. He knew what it was like, knew how it had been for all these years, knew what it would be like today and tomorrow and for the rest of his life, a clinging stink of oil and hands sticky with gore and an emptiness inside him.

He imagined himself walking, not towards anything, just away from the yard. It was like letting go of one those great lumps of blubber, dropping it into the pan and feeling himself step lightly away.

It was all he could imagine.

The sun came out from behind a cloud as John turned and walked away into a cool fresh breeze.

I don’t often associate Britain with whaling, but it was big business in the 18th and 19th centuries, providing everything from oil to parts for corsets. Whitby, on the Yorkshire coast, became a significant whaling centre, with yards processing the dead whales as they were brought in and it sounds like ghastly work. I hope some of the people there really did get to walk away from it.