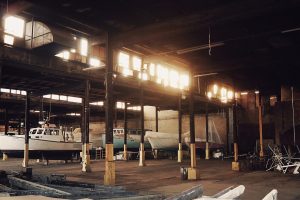 I’d never been a terrorist before. I’d never believed in anything that deeply. But an afternoon with my new acquaintances showed that they were true, deep believers.

“We have to make a point to the government.” Marcus, the young man cloned from the same cells as me, sat with his legs dangling off a walkway high in their warehouse base. “Sure, there were problems with the old cloning policies. All the eugenic experiments and the birth defects. But that’s no reason to treat us as second class citizens.”

I nodded along, like I’d been doing for the past hour. A career in PR had made me great at faking belief and interest. I even found some of his points convincing. After all, I’d spent a lifetime hiding who I was. The thought of change was appealing.

But I knew better than to buy into charismatic leaders.

“That’s why we stole those documents, Julian.” Marcus nodded toward a door at the back of the room.

I carefully didn’t look that way. I had one aim here and giving it away would ruin everything. Instead I just sat, letting the light from a nearby window warm my back.

“You know what’s in there?” he continued.

I shrugged with forced casualness. “Something about the cloning projects.”

“Proof,” he said. “Proof that the British government is still working with k’kiri cloners. Proof that the experiments live on. Proof of their lies and hypocrisy.”

My blood ran cold. I’d been told the documents showed that the cloning continued, but the human experiments…

“That could destroy the government,” I said. “Why sell it back?”

“That data gets released either way,” he said. “But when they pay blackmail money first, that’s more evidence that they knew and chose to cover it up.”

His footsteps echoed around the warehouse and then out, leaving me alone.

I looked around. This was my chance. I could slip out, run to the embassy, and get help. Within an hour, they’d have these idiots and their data.

But if our security people saw Marcus they’d know that I was a clone. Goodbye reputation, goodbye career, hello life as a waiter, a rent boy, or worse yet a management consultant.

No, I needed to get that data myself. Once the embassy had it back, they might stop looking for the thieves.

I double checked that no-one was around, then headed toward the door Marcus had pointed out. My footsteps echoed around the warehouse, thundering like a herd of elephants. Sweat poured from every inch of my skin, staining clothes already filthy from my kidnapping and questioning.

Somehow, no-one was alerted by the sound of my movements. I reached the door, still all alone.

I’d been expecting a number pad or even an old-fashioned physical lock. Instead, there was a receptor for a genetically key.

At last, a lucky break. If Marcus was in charge then this would respond to his DNA. DNA that I shared.

I licked my finger and pressed it against the sensor. The pad glowed green, there was a click, and the door swung open.

This had clearly once been a security vault. The walls and floor were made of reinforced metal plates. Empty lockers lined the walls.

In the centre, sitting on a table, was the blue bag Marcus’s people had stolen at the airport. It was still sealed shut.

I grabbed the bag and slung it across my shoulder, the weight of hard drives banging against my back. Closing the door behind me, I rushed out onto the walkway around the upper level of the warehouse.

Marcus and a dozen goons stood in front of me.

“You disappoint me, Mister Atticus,” he said. But if he really was disappointed then his face didn’t know it. His look was one of pure gloating pride.

“Why give me this chance?” I asked. There was no way I could fight them, but if I started a conversation, any conversation, maybe I could worm my way out. That was what I was good at.

“Every clone deserves a chance,” Marcus said. “Shame you wasted yours.”

One of the terrorists punched me in the face, sending me staggering into the arms of the next one. He grabbed the bag while two others took my arms and flung me to the ground. Heavy boots smashed into my stomach, my ribs, my face. Pain was everywhere. I tasted blood and felt a tooth come loose.

They dragged me to my feet and held me up in front of Marcus. Sunlight from the window warmed my back again.

“This is for betraying us,” he said as he pulled out a knife.

Summoning all of my strength, I twisted my arms. Slippery with sweat, I slid from the hands of the men holding me.

I flung myself backward. Old glass shattered as I burst through the window. There was a stabbing pain in both my legs.

I tumbled across a corrugated roof, fell a dozen feet, and landed with a thud in an alley. Forcing myself up off the ground, I ran.

I wasn’t surprised when, on reaching the embassy, security dragged me aside. I’d been missing for a day and looked like hell. They had to be worried.

But as they pulled glass from wounds, poured on disinfectant, and applied bandages, I realised that their expressions were stern, not sympathetic.

Warren, the head of security, came into the room.

“We’ve found out who’s behind the theft,” he said.

He slammed a picture of Marcus down on the table. It was a little blurry, clearly blown up from security footage, but there was no escaping the resemblance to me.

“Can I get my things before you kick me out?” I asked. I felt hollow inside, as if my world had collapsed and there was nothing left to hold me up.

“Oh, no.” Warren dragged me to my feet. “You don’t get out that easily. Ambassador Canning will see you now.”

And so we continue with Diplomatic Baggage, a tale of lies, diplomacy, and uncomfortable situations. You can find the previous stories here:

What Lies Behind Us – On the alien planet of Herrje, Julian Atticus rushes to save the British embassy from a public relations disaster.

The Best Laid Plans – An encounter at the spaceport ruins Julian’s day.

Friday Night on Herrje – The fallout from a theft ruins Julian’s Friday night.

Making New Friends – Julian tries to get out of a worsening situation.

If you enjoyed this then you can read more about Julian Atticus, cynical PR man of the future, in my collection Lies We Will Tell Ourselves. And come back next week for the next installment, as Atticus’s chickens come home to roost.