Have you thought about where e-readers are taking us? I don’t just mean emptier shelves round the house and less weight to pack for holidays. I mean the bigger changes that they’ll bring, as change ripples out through the institutions built on old technology.

Yesterday’s post provoked some interesting responses about publishing, and I’ve written before about why kids will still want old style books. But there’s so much more to it than that. Because our default concept of reading is based on privately owned paperbacks, but the reality of books is far more complicated. 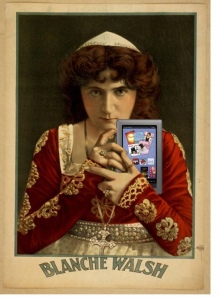 Glenatron mentioned textbooks in response to yesterday’s post. And he’s quite right – they could be vastly improved by using the benefits of an electronic medium. They could be repeatedly revised and updated, colleges and schools buying into the updates instead of whole new books. No more battered, out of date books with notes in the margin and penises crudely scribbled onto the photos.

But getting there is very complicated. Because for schools to use e-books in classrooms they first need e-readers, but to justify the e-readers they first need the textbooks to go on them, so there’s a tricky circle to be broken. Not to mention the risk of e-readers going missing – schools will probably need them cheap and sturdy.

Then there’s a bigger academic issue, because part of how we legitimise knowledge as correct and of value is by publishing it through established academic houses and then keeping that edition of the book set, unmoving and easily referenced for years. That’s an approach that doesn’t work so well with the changes going on.

E-readers have the potential to radically change both education and the knowledge economy around it. But it’s going to be a tricky thing to do.

This was another point raised in response to my post yesterday, this time from Sheila. Our model of publicly shared books – which is to say the library system – is built around books that are trapped on the physical page. New lending models and legal frameworks will be needed to cope with lending e-books. Those new models could make books more accessible than ever, or shackle the electronic age with assumptions from the paper one.

And what about libraries as public spaces? If we start borrowing and referencing by download from library webpages, how will those centres of communal activity be supported, never mind the experience and wisdom of the librarians?

When a book’s published electronically it’s much harder to stop people copying it, just like with music. And that has huge implications.

I could go on for hours about this one. Suffice to say that old models of intellectual property are poorly designed for the modern age, but big companies insist on wielding them to hold back their profits against the inexorable tide of change. It’s not just copyright – look at the pharmaceutical companies getting outraged about life-saving knock-off medicines, or King’s battles to protect its dubious gaming trademarks.

The best companies will respond by innovating to appeal to customers and by finding ways to profit in an age when you can’t realistically stop low level copying. Others will continue on the defensive, keeping the lawyers busy as they go down fighting. The end results should be innovation and a richer culture, but the journey there may be messy.

What have I missed?

What are the other implications to the shift to electronic books? What angles have I missed? Leave comments, share your wisdom.