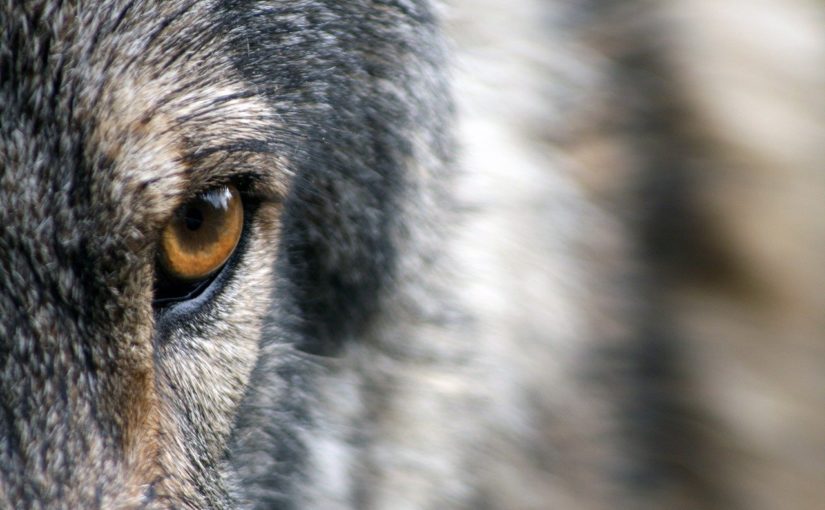 The wolf prowled into town on paws as soft as mist and as deadly as winter. Her every breath made the leaves trembled in the trees.

The wolf grinned, drool dripping between saw-blade teeth. She would eat well today.

She stopped at the first house.

“You think this can protect you?” she called out with a sneer.

“It’s all I have,” the first pig replied, his voice high with fear. “But there’s no meat on me. Am I even worth eating?”

He wasn’t worth answering. The wolf took a deep breath, her lungs swelling with all the power of the east wind, pursed her lips, and blew.

The house exploded beneath the force of the gale, straw bursting apart and billowing through the air.

The pig cowered in the ruins, frozen by fear. The wolf snapped her jaws shut around his throat and tasted hot, delicious flesh. She gave in to her hunger, rending, tearing, chewing, until all that remained was bones and blood-spattered chaff.

She brushed a straw from her nose and frowned. The pig had been right – he wasn’t nearly enough to sate her appetite.

She stalked over to the house of wood. It was carefully constructed, timbers linked with dovetail joints and wooden pins, an apple carved into the frame above the front door. The windows were shuttered and bolted.

“You think this can protect you?” the wolf called out as she admired the handiwork.

“I built it with all my skill,” the second pig replied, his words sharply edged, the voice of a creature failing to hide his fear. “I have faith that it will stand.”

“Let’s put that faith to the test.”

The wolf stepped back and took a deep breath. The wind was a great power within her, a living, surging, seething thing. Then she blew.

The house shook. Shutters rattled in their frames. Joints creaked under the strain. The wolf kept blowing determinedly, her breath the full force of the elements.

“I told you,” the pig shouted over the howling wind. “I said that it-”

With a splintering crash, the front door flew in, wrenching away half the doorframe. Timbers around it buckled and broke. Splinters whirled. Walls fell. The roof went tumbling across the street.

The pig tried to run but the wolf was faster. Paws pinned him in the mud. She smelled the blood seeping from a hundred splinter wounds.

“I don’t want to die,” the pig whimpered.

“And I don’t want to be hungry,” the wolf said, a moment before she sank her teeth in.

When she was done, she wiped the blood from her muzzle with the back of her paw. That had been good. The carpenter had more flesh on him. But still she hungered for something more.

She approached the brick house, standing tall amid the scattered straw and pulverised planks. The third pig looked down at her from a crenellated turret on the northeast corner.

“You think this can protect you?” the wolf asked, licking her lips.

“I bloody well hope so” the pig replied. “I spent half my fortune on it.”

The wolf took a deep breath, her chest expanding, her body flooding with the wind’s power. Then she blew.

The wolf’s breath battered at the brickwork, blowing dust from the mortar and whistling through the roof tiles.

The wolf frowned, took another deep breath, and blew gain.

The wind was a vast force pounding at the house. The turret trembled and the pig clung on with gritted teeth. A chimney pot shattered in the street.

But still the house stood.

The wolf growled in frustration. This wasn’t how it was meant to work. She blew, houses fell, pigs got eaten. That was the way of the world.

She took another breath, the deepest she had ever known, sucking in air until she felt she would explode. And then she blew.

The tower wavered. The pig crouched in terror behind the battlements. The front door rattled in its frame like the battering of hail on a frozen pond. The wolf blew and blew until there was nothing left in her and she lay panting in the dirt.

The pig peered down from his tower, drew out a cigar and lit it with a gold-plated lighter. He grinned and blew a smoke ring.

The wolf forced herself up onto her paws. Her head hung in shame and her belly rumbled.

“Why the rush?” the pig said. “I know a way you can stay here and still be well fed.”

“Stop taunting me,” the wolf snapped. “We both know you’re not coming out to be eaten.”

“True,” the third pig said. “But you see those windmills I had built on the hill? They could feed quite a community. Lots of hard workers for my new factory. Lots of succulent little piggies for you. Offer them bread and jobs and not too much death and they’ll come from miles around. All I need to make those mills work is a little gust of wind…”

This story started out with a simple writing exercise and ended up going all Animal Farm. Who would have thought it from an old lefty like me?