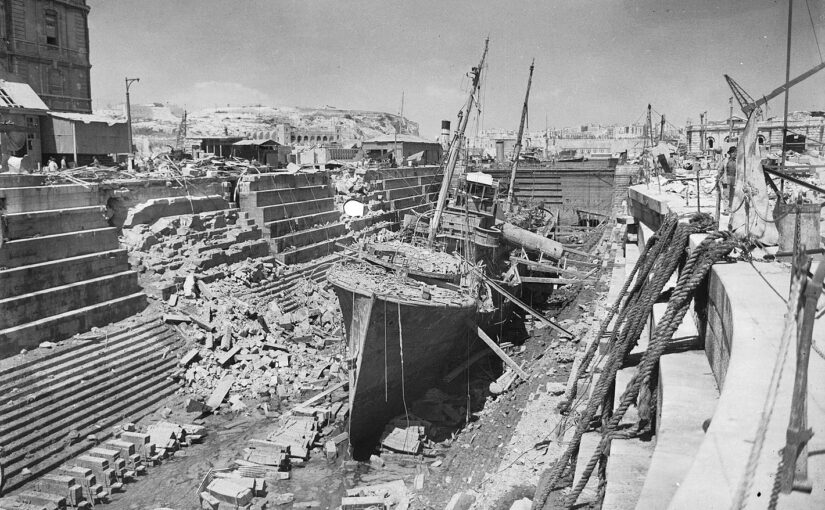 “The food here is terrible,” Giuliano Fattorini said, scraping the last briny, flavourless scraps from a tin their captors had insisted on calling beef. “It is no way to treat an airman.”

“Yes, Captain.” Luca stood by the barred window, scowling out across the rooftops of Malta. He had worn that same expression for three days straight, ever since British sailors had fished them out of their ruined plane in the harbour. Though Fattorini admired the younger airman’s passion, his intensity was exhausting to be around.

Outside, bombs were falling, filling the air with the whistle of their descent and the roar of their detonation. That was another thing Fattorini disliked about being captive on the island. The Regia Aeronautica and their Luftwaffe comrades were doing a splendid job against the British, he had always said so, but that splendour was unsettling when experienced up close.

Luca’s eyes widened and he flung himself away from the window. Fattorini rolled out of his chair and covered his head just as a blast shook the building. With a groan of straining masonry, the outer wall collapsed, hitting the street with a crash.

Luca was back on his feet first, staring out through the swirling dust.

“Captain, this is our chance!”

Fattorini peered across his fallen chair. “Our chance?”

“To escape and return to the war. Come on!”

Luca lowered himself to the edge of the floorboards, then swung his legs out where the wall had been. He looked back expectantly at his captain.

The floorboards were rough beneath Fattorini’s fingers, the sounds of the falling bombs unbearably loud. Of course he wasn’t afraid, it was the shaking of the building that made him tremble.

“Is it safe?” he asked, crawling across the floor.

Luca dropped onto the heap of rubble below. Fattorini followed. A brick slid from beneath his foot as he landed. His ankle turned, but not painfully, so there was no reason not to follow Luca as he scrambled down the heap.

Most people were indoors, hiding in shelters and cellars while planes battled overhead, the rattle of guns and roar of engines like thunder from a clear sky. The two men dashed down empty streets, Fattorini puffing and panting as he struggled to keep up with Luca.

At a junction, a soldier was crouching behind an overturned truck. When he saw them coming, he leapt to his feet and swung his rifle around.

“Halt!” he shouted in English. “Hands in the air!”

Fattorini did as he was told.

“What did he say?” Luca asked. He was ten feet ahead of Fattorini, and the soldier swung his rifle jerkily back and forth to cover them both. Fattorini hoped that the man’s trigger finger was steadier than the rest of his hand, or this could end very badly.

“He says hands up,” he translated. “Alas, it seems our escape is at an end. We will be forced back to a new cell, to live out the war on watery stew and bad coffee. Oh, for a—”

“What are you on about?” the soldier shouted over the sound of bombs. He advanced towards Fattorini, rifle still raised. Fattorini, stomach jumping, clamped his mouth shut.

A chunk of masonry hit the soldier in the head and he fell, his rifle under him.

“Yes!” Luca shouted. He had another brick in his hand, ready in case his first throw had missed. “Come on!”

They ran on through the streets, heading for the harbour. Fattorini sweated like a pig standing at the butcher’s block. Was it his imagination, or had the bombing grown even more intense?

They emerged at the water’s edge. There were boats in the harbour, some of them sinking or riddled with shrapnel, others bouncing on the waves. Half the buildings had their windows blown out or sections torn from their front facings.

“That one,” Luca said, pointing to the nearest boat. “If we get in while the British are busy, we can sail out before—”

There was a fountain of water as a bomb landed feet from the boat, then a muffled boom and a towering spray. The boat was flung onto its side, sat for a moment on the sudden swell, and then tipped over, landing upside down. Its exposed hull was riddled with holes.

Luca stared at the ruined boat as waves lapped against its sinking sides. He held himself with a different sort of intensity now, his mouth hanging open, eyes wide.

Fattorini laid a hand on the younger man’s shoulder.

The bombs were still falling. Fattorini steered Luca to the doorway of the most solid building he could see.

“I will be sorry to miss it too, but we can’t help if we are bombed or drowned, can we? We will just have to wait for another chance.”

They crouched in the doorway, heads down in case shrapnel flew their way. Fattorini thought again about his tin of watery beef stew, and about the shredded mess that was the underside of that boat. He felt suddenly giddy at the thought of returning to their prison room. Maybe he could grow to like English food after all.

I have a new Commando comic out today. Flight to Freedom is a story of aerial combat and daring escape in the Mediterranean theatre of World War Two, featuring Capitano Fattorini and Luca in very different circumstances. You can buy it at newsagents or in digital form via Amazon Kindle or Comixology.