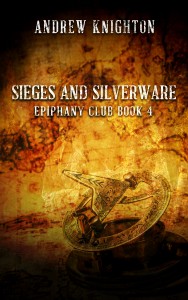 You never knew what you might find down a sewer. Dirk Dynamo had learned that the hard way, through encounters with hidden chambers and desperate fugitives, giant rats and mad machines. Given the stink and the filth, he’d have preferred to keep them at arms length. But he had to admit, he was curious to see what would be lurking in the tunnels under York.

Besides, if Blaze-Simms was right and there was something hidden down here, the sewers would be the best way to get close to it.

“It should be around here somewhere,” Sir Timothy Blaze-Simms said, holding up his lantern. The light extended both of their shadows down the tunnels, across brickwork, waste water, and a few scurrying rats. “At least if I remember the documents correctly.”

Dirk brought his own lantern up close to the wall and started examining the brickwork, adjusting the sack of tools on his back as he did so. Without the evidence that had been stolen from Blaze-Simms’s hotel room, there was a risk that they’d just be flailing in the dark, trying to find a hidden chamber Blaze-Simms had glimpsed among those documents. But if they did find it, who knew what might be here?

“This ain’t looking good,” he said as he reached a junction in the tunnel. “No gaps between the bricks, no fresh cement, no scrapes where things have been moved. If there is a way from here into some ancient cavern or chamber, no-one’s been using it.”

“What a shame.” Blaze-Simms crouched at the edge of the sewer water, his tailcoat trailing in the ooze. He took out a magnifying glass and peered at the wall. “But I have to say, the brickwork here is rather good.”

“Not for much longer.” Dirk set down the lantern, pulled a pickaxe out of his bag, and started looking for a likely place to dig.

“I say,” Blaze-Simms said, “is that really a good idea? All we know is that there might be a chamber down here somewhere. You could end up wrecking the sewers for nothing.”

“If the town keeps shaking then plenty of other stuff gets wrecked. You got a better idea?”

The ground began to tremble, the movement becoming stronger with each passing second. Blaze-Simms staggered to the wall and clung to the slimy bricks to keep himself upright. Dirk planted his feet firmly apart and rode out the quake, watching the water as he did so.

“There!” he exclaimed, pointing to a spot from which the ripples ran in opposite directions. “Under there.”

As the shaking subsided, he began smashing his way through the sewer wall, heading down and away from the tunnel. Blaze-Simms pulled a spade from the bag and set to with enthusiasm.

“How did you know?” he asked

“Years working in mines,” Dirk said. “You learn to spot the signs.”

After a day of intellectual endeavour and unexpected violence, simple physical labour was immensely satisfying. Once they were through the brick wall, the dirt gave way easily and they made swift progress into the ground.

A few feet in, the trembling started again. Clods of earth bounced off Dirk’s head as the ground shook above him. Then a brick fell from the gap in the tunnel wall. It was followed by another and another, clattering down perilously close to Blaze-Simms. Then a chunk of the ground above Dirk gave way, almost knocking him down.

The trembling didn’t stop. Instead it grew more violent, shaking their half-dug tunnel, slopping sewage water down after them.

“We should go back!” Blaze-Simms exclaimed. “Before it caves in on us.”

Frustrated, Dirk swung the pick. He knew that Blaze-Simms was right, but he didn’t want to give up. His bruised shoulder ached, his brow stung where a falling rock had hit it, and he was damned if he was going to give up and start this all over again.

Except that he didn’t really know where they were going, what they would find, if this was really the right direction, if they even-

A tremor, more violent than the rest, shook the tunnel. The ground collapsed in front of him, a dark chasm suddenly opening up.

“There!” he said, pointing into the blackness. “I’ve found what we’re after!”

“But what’s down there?” Blaze-Simms asked, peering past Dirk.

“I don’t know, Dirk said. He ducked out into the sewer, grabbed a lantern, and headed back for the hole. “Let’s you and me find out.”