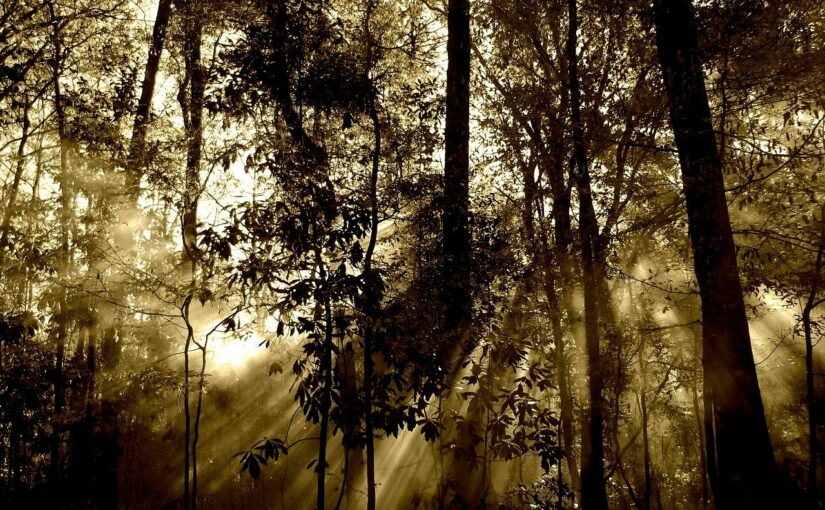 “Urgh, enough of this crap.” Vlada pushed her plate across the table. “Am I the only one craving meat?”

“I know what you mean. I’d kill for a burger right now.”

“Not burger. Proper meat. A steak. Some chops. Not endless leaves and vat-grown proteins.”

“You both knew what you were getting yourselves into,” Tatiana said with the calm, reasonable tone that had earned her position as commander. “This is a research mission, not a colonial one. Two years of running tests and only eating what we can grow in the habs. Everything else has to wait until they send settlers from Earth.”

“We know there are animals out there.” Vlada pointed through the window to the alien jungle surrounding their outpost. “And thanks to our tests, we know that their proteins are compatible. Why not eat one?”

“Rules are rules.” Tatiana put her plate in the sink. “You two finish your dinner, then get out there and set the new sensors. I’m heading back into the lab.”

Once she was gone, Vlada set her fork down and looked at Jayden with the intensity she normally saved for games nights.

“You know how to shoot, right?” she said.

“It’s not an insult. I shoot too. The point is, we’ve got guns in the equipment locker, just in case. Getting a proper look at one of those creatures would have scientific value, and if we get to eat the meat afterwards, well…”

“Even though the commander won’t?”

“I’m American. We like to play the rebel once in a while.”

The body lay amid the large, purple leaves that covered the forest floor. One limb was stretched out past its head, as if grasping for something just out of reach. Blood ran, thick and dark, from the hole in its chest.

“I knew they were bipedal,” Jayden said. “I just hadn’t expected it to look so…”

Jayden lifted one of the forelegs, with six long toes stretching out from its bald paw. One of those toes was opposable. Better to think of them as forelegs rather than arms, just like it was better to think of the creature, with its bare face and large empty eyes, as being ape-like instead of anything else. It didn’t help that he’d managed to shoot one of the smaller ones, six feet tall and without the scales that sometimes sprouted from their backs.

“Here,” Vlada said, offering Jayden a broad knife. “You killed it. You get to make the first cut.”

“Um…” Jayden ran his gaze over the carcass, trying to work out where the best meat would be. The problem was, the more he looked, the less he thought of it as a carcass and the more it seemed like a corpse.

“You do it,” Jayden said. “You’re more experienced than me.”

“Weak-ass Americans.” Vlada snorted and knelt down in the squeaky purple leaves. She tipped the creature’s head back, exposing the throat. “Those eyes, though.”

She rolled the head, so that they wouldn’t see its face. That only drew attention to the mass of brown hair, the sort of curls a model would have killed for.

“Down here,” Vlada said, moving here attention to the legs. “It will be just like ham.” She pressed the point of the blade against the thigh, then hesitated, staring at the creature’s bare feet. “Look at that. It has a callous on its toe, just like my Uncle Grigori.”

Above their heads, trees swayed. In the distance, a winged creature sang as it soared above the trees.

“And now that thought makes me sick.”

They both sat back, the knife abandoned, staring at the poor, limp body.

Jayden ran a hand over his face. “Now what do we do?”

Tatiana was waiting when they emerged from the airlock into the hab, their shoulders slumped and their gazes downcast. She looked pointedly at the guns and the knife hanging from Vlada’s belt.

“I hope you idiots at least took measurements before you butchered it.”

Vlada tossed her a sensor box full of photos and biological readouts.

“No butchery,” she said. “We buried the corpse.”

“We buried it,” Jayden said. “Had a prayer and put up a cross and everything.”

“You really are idiots,” Tatiana said, then laughed. “And here I was, all ready for a steak.”