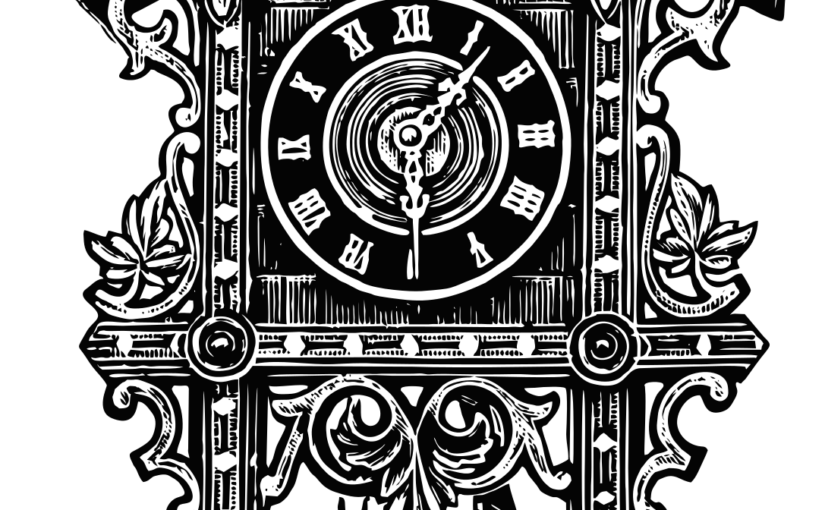 The clock was crafted from velvet and frozen whispers, cogs edged with the sharpness of expectant waiting, framed in a box made from slices of pre-dawn calm. One hand was snow taken in the moment it fell upon the drift, the other polished planking from a funeral parlour’s floor. In place of a cuckoo there was a tiny mute gargoyle, its hands pressed against its stone mouth.

Instead of ticking, the clock created moments of silence. Falling into the room, they softly smothered the noises that would have been. The creak of the chair. The rustle of the curtains. The thuds and mumbles from next door.

For the first time in his life, the clock maker found the perfect peace he had dreamed of. Free from the noise of an ever more frantic world, his attention turned in on refining his work. He made a clock that could count off hundredths of seconds, a watch small enough for a mouse’s pocket, a ballerina doll that danced out the hours.

The silence kept coming. It spread from the clock maker’s workshop to the rest of his house. The cook was freed from the whining of the scullery boy. The clock maker’s insomniac wife slept all the way to noon. The cat crept up on its prey unheard. They worked and rested and stalked in peace, and the house filled with their happiness.

The silence seeped into the street. The discordant rumble of carriages and the clopping of hooves faded. Angry voices became still. The racket of the shoe factory no longer filled the neighbourhood from dawn to dusk.

In the stillness, a carter took a moment to admire the blossom he had always missed on the trees, and a newspaper seller finally found the words he needed to complete a sonnet. Birds rested, undisturbed by the frightening noises humanity had made for far too long.

Three doors down from the clock maker, a blind woman wept.