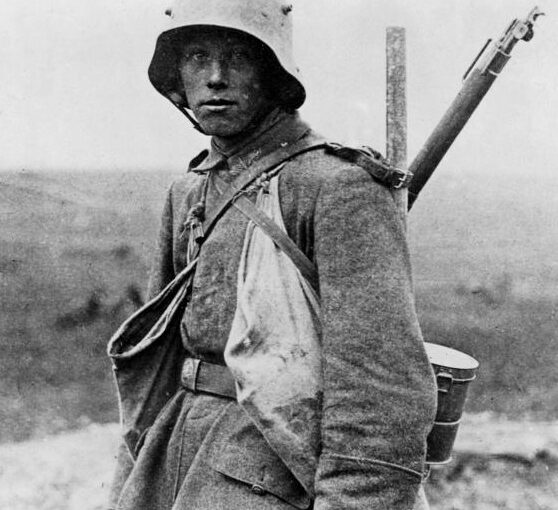 The world was an overwhelming roar, a noise so vast and deafening that Hans Feist shook all the way to his bones. The ground beneath him lurched; the air stank of smoke and blood; everywhere he looked, when he dared to peer from his tiny shelter in the trench wall, he saw earth and sky combine as fountains of dirt spewed from craters gouged out of the hellscape that had been the Somme.

So this was war. Not grand charges, noble duels, or banners flying over a victory parade, but being shelled to death, hungry and haunted, his trousers soaked with mud and piss. He clutched the tiny wooden crucifix his mother had given him and prayed for salvation.

He didn’t even know who was still alive. His brain was so shaken that he couldn’t remember the names of men he had arrived with, never mind the replacements who had come since. He couldn’t remember how long he had been here, just that it was too long.

An officer walked down the trench toward Hans. The man must be insane, to walk so openly through this storm of shells. Hans clenched with dread as he anticipated the moment when that pristine uniform and waxed moustache would be reduced to a cloud of blood. But the man kept coming, somehow untouched, and a worse fear gripped Hans. Was the officer going to order him up to his post, ready to defend the line?

The officer crouched in the mud, which barely touched his polished riding boots, and peered into Han’s tiny shelter.

“Didn’t make it into the tunnels, eh?” the officer said.

Hans shook his head. He probably should have tried. He would have been safer down there than in this muddy hole, but he couldn’t face the moments of exposure it would take to reach the steps. Fear was more powerful than reason.

Hans had heard about officers like this, ones who would offer a transfer to somewhere safer in return for sating their own needs. He wanted to think that there were lines he wouldn’t cross, but this shaking world made that untrue.

There was an explosion behind the officer. It should have torn him apart, but instead he was framed by the blast, silhouetted against the pale burst of smoke and debris. In that moment, spikes of windblown hair became horns and fire flickered from him.

Hans squeezed the crucifix so hard that his hand ached. Now that he saw what the officer was, he could not unsee it. The pointed teeth, the snake-like eyes. The man drew a cigarette, lit it with fire from the tip of his finger, and offered the packet to Hans.

Hans screwed his eyes tight shut. He should be better than this. His soul was at stake, something infinitely more valuable than this weak and trembling body. But he had lived in mud and blood and the roar of the guns for so long that he couldn’t remember what it felt like not to be afraid.

As he took the officer’s hand, a sense of peace came over Hans. Was this part of the deal, or was it the certainty that came with knowing that, whatever happened from now on, his future had been decided?

The officer pulled Hans to his feet, then led him away, walking through the maze of twisting trenches. They didn’t see another soul, but the shells kept shaking the ground, filling the air with noise and debris. With each step, Hans left a little of his fear behind, shedding a weight that had held him down for so very long. He strode purposefully through the mud, toward a light beyond the clouds of smoke.

He was almost free.

The officer turned to look at Hans and mouthed a single word: “Now.”

There was a crash and a force like a hundred hammer blows flung Hans off his feet, slamming him into the trench wall. He slumped to the ground, half his body blazing with pain. With one working eye, he stared down at the blood and guts sliding from his torn tunic. All the fear flooded back, redoubled by his inner scream of pain.

The officer stood over him and chuckled.

“And I fulfilled it, many years ago.” The officer crouched to look Hans in the eye, and his smile was terrible to see. “Now we are into the payment, and we both know what your idea of Hell would be.”

Through the pain and the fear and the death of hope, Hans felt himself slip toward darkness. Tears ran down his cheeks.

The world faded away…

Hans Feist woke to an overwhelming roar, a noise so vast and deafening that it shook him to his bones. He didn’t know who was still alive, couldn’t remember how long he had been here, but he knew that it was too long.

This isn’t the only war story I have out this week. Horror of Hurtgen, my latest issue of Commando, is out on Comixology, in newsagents, and as part of a bundle through DC Thomson’s online store. Set in the late stages of World War Two, it follows an American soldier caught up in the horrifying fighting in the Hurtgen Forest. Fighting through a fever to prove himself, he finds himself facing real monsters alongside the Nazis. Are his visions real, and what will they mean when his squad finally reaches the enemy lines?