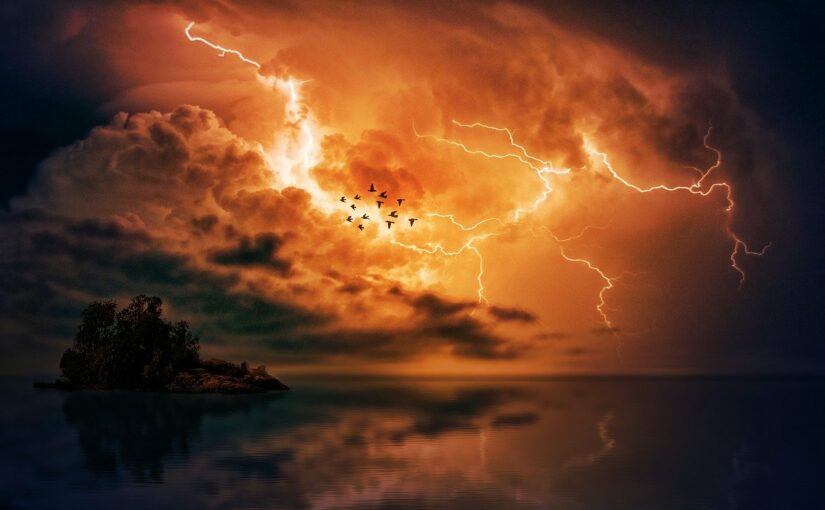 Jay emerged from the elevator carrying a tray of vials, each one holding a newly spliced genetic treatment. They rattled against each other as he walked to the football-sized eggs at the edge of the pool, themselves the products of endless modifications.

Crystal was in the pool up to her waist, her legs hidden by lilies, goosepimples rising on her bare arms.

“Thought you were smart,” Jay said.

“Of course I am. How do you think I got from the mani-pedi counter to the postdoctoral program?”

“Then why are you in the water? You know that could get you fired, or worse.”

He nodded down the pool, to where the latest creatures were swimming. One was crocodile-like, but with wings sprouting from its back. The other was a wobbling blob whose shape was slowly shifting, its body unable to settle, skin churning and shedding scales. It had rows of vicious teeth and might have made a deadly predator if its own body wasn’t killing it.

“These creatures are meant to be how we survive,” Crystal said, “whether they become our next sources of food or the plough horses of a flooded world. I want to be part of that transformation.”

Jay fixed a needle onto one of the vials, then plunged it into an egg. He repeated the procedure along the row.

“Don’t come crying to me when one of them turns out to be half wolf, half cow, and ready to eat your leg.”

An egg shook, then started to crack.

“That was quick,” Crystal said.

“Too quick. Usually a sign that it’s going wrong.”

Jay stepped back, but Crystal moved closer, the water swirling around her, and ran a hand across the shaking shell.

“Since when did you become so maternal?”

“We’ve been birthing new life here every day for three years. Hasn’t that changed you?”

He shook his head. “I’m here for the science.”

A chunk of shell fell away and a beak poked out, dripping with amniotic fluid. A bird’s eye peered at them, but the shell held strong as claws pressed at the gap.

“Looks like another dud,” Jay said. “If it’s not strong enough to escape the shell, it’s got no chance of surviving that.”

He pointed into the distance, where a storm was raging over the flooded remains of London, lightning flashing down the gleaming glass of abandoned office towers.

“That’s not true,” Crystal said, slipping a hand inside the shell, where the creature rubbed its slippery head against her skin. “Some infants need help to survive. Look at human babies.”

Jay snorted. “Humans are the ones who made this mess, I don’t think we’re a good example.”

“Those were the old humans. We’re the new ones.”

“Enough with the hippy bullshit, Crystal. Our world’s dying. Get out of the water and help me make something that might live.”

Crystal pulled on the edges of the broken shell and the calcified layer cracked open. The bird-thing slid out, its undulating body covered in tiny feathers. The feathers changed as it darted through the water, colours shifting to match whatever lay around it. It swam around Crystal like a dog running around its owner, eager for attention, rubbing its head against her. She ran a hand down its back, between the feathers, skin against bumpy skin. Jay shuddered at the sight.

Crystal’s skin changed, slowly at first, its colour shifting to match the creature. After a moment, bulges appeared, and tiny feathers pushed out through expanding pores.

“Crystal?” Jay swallowed, took a step back, almost tripped over the tray of vials. He couldn’t take his eyes off her. “What have you done?”

“What do you think?” She smiled into the creature’s eyes, then pressed her face against its cheek. The creature made a chittering noise. Others swam from their end of the pool, fins and wings flapping, and Crystal moved away from the edge, so they could swim around her. Jay finally saw the fish’s tail where her legs had been.

“You could have died,” he croaked. “The serums aren’t made for humans.”

“And humans aren’t made for this world,” Crystal said, “but here we are. I had to take a chance. It was that or be left behind.” She looked back at him. The storm was coming closer, lightning crashing across isolated hills rising from a flooded land. “Take a chance. Join us.”

Crystal stroked the blob beast. Her flesh rippled between the scattered feathers and when she smiled it was with a jaw full of pointed teeth.

More eggs cracked open. Strange creatures crawled and slithered across broken shells, down to the pool where Crystal waited. Beneath the storm, a tidal wave was rushing in, tall enough that it would soon engulf them.

“Oh, Jay,” Crystal said, shaking her head. “I thought that you were smart.”