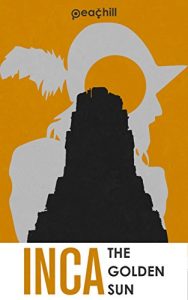 Kunak raised his war club above his head and joined in the battle cry. Across the plain, the enemies of the Incan empire were emerging from the jungle. Foreigners from across the ocean. The so-called Emperor Manco, who had accepted the crown from their hands. The men who followed him.

Here, outside the capital of Cuzco, the true Incas would rain death upon them.

Kunak and his comrades were old friends, veterans of the fighting in the north. The stone heads of their war clubs were well polished, their wooden shields scarred by past fights. They stood proudly behind their commander, Quehuar. He had only recently inherited his father’s place, but he had the bearing of a great man.

Drums and flutes sounded the advance.

The warriors began a marching chant, voices raised in unison. As they advanced across the field they sped up, rushing to catch the smaller enemy force while it was still unprepared. Everyone had heard about the strange beasts and magical weapons these Spaniards wielded. They would grant them no other advantage.

They crashed into the first of the enemy, a line of Manco’s men. Kunak smashed a warrior in the head and slammed another with his shield. Already, the enemy were in retreat.

The veterans cheered and advanced again.

Then came a sound like thunder. From the left, monsters tore into the Incan line. They had four legs, wild eyes, and maws that foamed with fury. From their backs, Spaniards lashed out with spears three times a man’s height.

Some men were crushed beneath the feet of the beasts. Others were run through by the spears, their cotton armour no protection against those deadly sharp points. Others turn and fled, only to be hacked down as the Spaniards drew weapons that glittered like silver in the sunlight.

All around Kunak, men ran. The line collapsed. He wavered, caught between duty and terror.

“With me!” Quehuar shouted, placing a hand on Kunak’s shoulder.

The sight of his commander, of the fire in his eyes, that was enough to lend him strength. Kunak gripped his club tighter and followed.

At a signal from Quehuar, men closed in around one of the beasts. Kunak stood directly in front of it. Its feet hammered at his shield and he felt as if his arm might break at any moment, but he stood firm. The circle of shields tightened, trapping the beast.

Quehuar leapt, landing on the creature’s back. He flung its rider to the ground. The man screamed. Warriors closed in, smashing him with their clubs.

The beast leapt, soaring over Kunak’s head, and for a moment he thought it must kill him. But it kept going, galloping away from the fight, a thing of beauty and of horror that vanished into the jungle.

Quehar lifted up the helmet he had taken from the Spaniard, blood dripping from its strap. Their whole warband whooped with the thrill of victory. Kunak’s pulse raced and he grinned with wild excitement.

Then came another thundering sound, different from the one that had come before. The man to Kunak’s left fell to the ground, blood pouring from the ruined side of his face. Another man spun and fell, his arm torn away as if by an invisible hand.

Kunak’s mind went blank with shock. He stared down at friends suddenly slain, struck down by some incomprehensible force. He watched a man’s grip loosen on the handle of his club and the weapon slowly role out of limp, dead fingers.

Chaos swept over him. Screaming. Shouting. Crashing. He saw Manco’s men coming and old instincts kicked in, letting him parry an attack and break his attacker’s leg with a blow from his club, even as the world approached him through a distant haze.

Then his senses snapped back, bringing a terrible clarity. Amid the smells of blood and smoke he wheeled and twisted, lunged and parried, desperately fighting for his life.

Somewhere along the way he found Quehuar, one arm hanging limp by his side. Together they fought their way toward the edge of the plain.

The whole army had collapsed. Clusters of men fought on but more were fleeing as the enemy, these traitors and invaders, pursued them with wild glee. There could be no victory, only survival.

“Run!” he shouted, pushing Quehuar toward the tree line. “I’ll cover your back.”

“What about you?” Quehuar asked, and Kunak knew that he had made the right decision.

“After this, we will need leaders,” Kunak said. “Men like you. Go. Run. Save the empire.”

For a moment, he thought Quehuar might resist. But the fight had been beaten out of him. He turned and ran.

The tree line was three hundred yards away. Quehuar was halfway there when a rumble approached Kunak.

A monster was galloping toward him, the rider carrying one of those terrible spears. Kunak raised his shield, ready to sell himself dearly for his leader’s life.

The beast swerved and ran past him. He lashed out with his club, but it bounced off the armour on the rider’s leg. He watched in horror as it headed straight for Quehuar.

Quehuar turned. With a determined expression, he raised his club.

The spear struck him in the chest, skewering him in a spray of blood.

Kunak’s legs gave way beneath him. He sank to the ground, watching in horror as the Spaniard lowered his spear and let the remains of a bold leader slide to the floor. The sense of loss was overwhelming, a weight that pinned Kunak to the earth.

He had thought that something could be saved from this horror. But all he had left was loss.

At the jungle’s edge, the Spaniard raised his fist and let out a battle cry.

At last, I can announce the reason why I chose the Incas as the subject for these stories.

Coming later this month from Peachill Publishing, Inca: The Golden Sun is a novella all about the conquest of the Incas by Spanish conquistadors. It’s a tale of ambition, greed, envy, and desperation, as two very different worlds collide. It’s a collaborative writing project on which I was one of the writers, turning someone else’s plot into the prose you see on the page. So if you’re enjoying these stories, please consider pre-ordering a copy now.